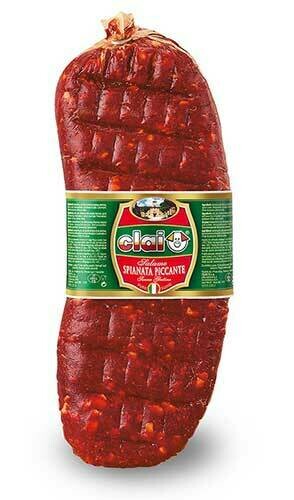 Famous for its chilli peppers, this salami is typical of Calabria region. Salami skins are filled with finely minced lean pork, lardon, salt, and chilli peppers, and then flattened for a signature "spianata" shape.
The Spianata Romana is part of a large family of traditional Roman charcuterie and is one of the first varieties of salami, as evidenced by documentation dating back to the seventeenth century. This is a popularly manufactured cured meat that has grown in popularity over time.
The flavour is rich and lasting, especially in the spicy type found in high-end delicatessens. The classic version of this cured meat has great homogeneity in the slices, which is particularly visible in the cut, and is the product of an excellent ageing process.
When tasting this product, the fragrant and fat sections produce just the right amount of sweetness to balance off its innate sapidity. In other words, it's an antipasti dish with a spicy chilli flavour, a characteristic that is unmistakable in this salami.
It's ideal for sandwiches, antipasti boards, pizza, bruschetta, and fresh veggies, mainly when paired with Italian red wine. It's a great way to surprise your guests with something different than traditional salami, and its spicy flavour won't leave anyone disappointed.

Keep refrigerated and consume within 7 days of opening.

Save this product for later
Display prices in: GBP

Receive your groceries at your home safely after ordering